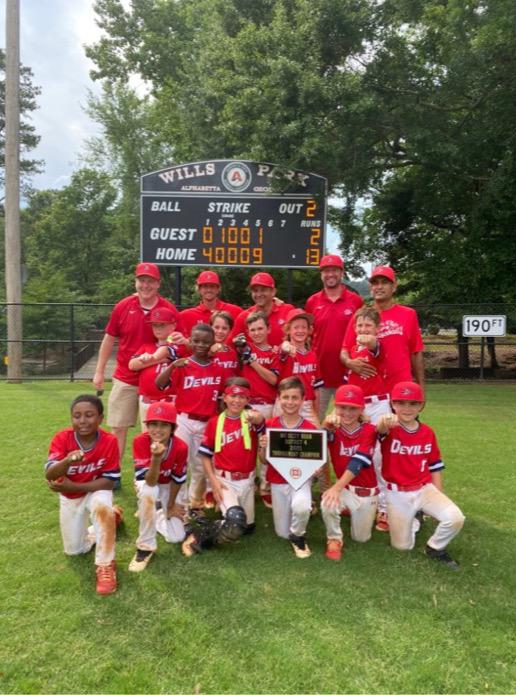 The 2021 9U Red Devils capped off a dream tournament season by winning the Dizzy Dean Georgia State Championship. The State finals victory was an emphatic one, defeating Murphey Candler Gold 15-5.

The Red Devils finished their all-star tournament season with a 16-1 record, winning 3 of their 4 tournaments, which included both the Dizzy Dean District 4 championhip as well as the State Championship. Their only  loss came in extra innings. The Devils outscored their opponents 233-96, receiving key contributions throughout the roster.

The Devils featured a balanced attack at the plate with a team batting average of .453 and on base percentage of .583, but were lead at the plate by Henry Mangum, Deven Patel, Travis Spaulding, and Henry DeBacker, who all sported batting averages over .500.  Aaron Baldwin sported an on base percentage of .630, and Max Aquillano led the team with 16 walks.

Pitching & defense were the calling card of this team, as the Devils sported a team ERA of 4.80. The infield defense was led by Grant Benjamin & Grey Lynch, who prevented numerous runs with sparkling plays all year at third & short respectively, while Griffin Abel stabilized the pitching staff behind the plate as a primary catcher for the club.

Both Lynch & Benjamin were also key cogs of the pitching staff, which, in addition to Lynch & Benjamin's efforts, featured command performances all year by JT Canterbury, Caleb Joyner, and Owen Rohm. Joyner closed out the first tournament win vs Sandy Springs, going 4 innings & only giving up 1 earned run. Canterbury led the team in strikeouts, with 25 in 16 innings. Rohm started both the district finals as well as the state finals, going 3+ innings in both games while only giving up 1 earned run in each outing. Rohm led the team with a 2.65 ERA.

Thank you to the park leadership, the team parents, and all that helped this team achieve so much this summer. What an incredible ride it's been for these kids & coaches.